By now we have all heard of the incident that took place at the waterpark where two ladies were sexually assaulted while onlookers jeered and recorded.

If this story upsets you, well done, you are a decent human being. If not, sit down, we have to talk.

Now what was even more upsetting than the incident itself were some of the comments that followed (by ladies) after the video was released. It ranged from “they deserved it” to “they were to blame”.

Victim blaming is a blemish on our society, a cancer that devours it from home soil, it gives birth to a world where perversions are allowed to flourish because victims are too scared to speak out against these atrocities, for fear of being blamed.

We are teaching our girls that others have the right to touch us if our attire is not deemed appropriate, and our boys that a woman’s worth can be measured equal to the length of her dress.

We as parents and influencers have a social responsibility to let the world know that this is not acceptable, and we will not tolerate it anymore. No longer can we be governed by a patriarchy that makes us turn our backs on our sisters in an hour where they need our shoulders.

We need to get back to the root of this epidemic. Our homes. Let’s raise our kids with respect for themselves and others, with freedom of choice, and the inviolable knowledge that our bodies are only that, our own. What is ours does not automatically become yours if it is not covered by acres of cloth.

Empathy is the fibers of humanity, sewn together by our daily interactions with our fellow human beings. We simply cannot allow the seams of the simple knowledge of right and wrong to be ripped out by an ignorant few.

So instead of hitting the record button the next time you witness a violation of someone’s basic human rights, speak out and intervene, it’s the right thing to do. 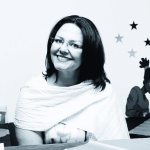 Inge Muller is a mom and salon manager, enthusiastic about health, fitness, and writing.