This column would be dedicated to people in Bahrain who are contributing to this society and putting great efforts into helping others and making Bahrain a better place.

Eman is a 28-year-old Bahraini, who started her journey of rescuing animals back in 2015 unintentionally when one of her friends convinced her to look after four kittens found in the trash. She had no previous experience with animals back then, but felt it is the right thing to do. The story didn’t end with Eman adopting these kittens, it was only the start of something great! Eman now is well known for her amazing effort with a team of volunteers who works closely with her, under Bahrain Rescues’ nonprofit organization since 2016.

On average, Eman and her team rescue two animals per weeks with a focus on dogs and cats but have rescued other species like birds, hamsters, and others. Since most rescued animals are injured, the next step is to get them the medical care needed. Once they fully recover, which can take long periods in some cases, they spay and neuter the animals to put them up for adoption. Bahrain Rescues have joined few pop-up markets seeking forever homes for animals who are ready to get adopted.

Bahrain rescues have their own small shelter now; it is home to 40 rescued cats, dogs and 4 hamsters. The shelter is looked after only by Eman and her team with no external help or permanent workers. This is due to limited resources as donations are used to cover rent, electricity, and water. The medical care provided is also donation based, donors give their contributions to vet clinics directly without the involvement of Bahrain Rescues. The urgent cases of rescued animals can be found on @bahrain_rescues Instagram account.

Eman aims to build a rescue center and hold events at schools to share her message with kids. Bahrain Rescues’ nonprofit organization was established based on the effort, love, and passion of Eman and her team alongside with the generous donations of those who care. 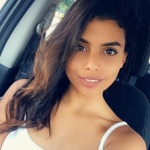 Nourah Alamro is a geo-scientist by major and certified in plant-based nutrition. She also runs her own business, Sage, for wellness retreats. @vegan_nourah @sage.bh